It’s time to get rid of cable or satellite tv by switching to streaming tv. Making the switch has never been easier and you can save hundreds every year and still have your favorite shows.

How Do I Get Rid of Cable And Still Watch TV

But there are actually hundreds of streaming channels in 2021.

A great example of a big streaming channel that is made up of a bunch of your favorite cable channels is Discovery+.

The Discovery+ Streaming Channel is just $4.99 per month, but it has most of the cable channels that my husband and I watch.

Before we get into all of the best Free and Low Cost Streaming Services, let’s go over how you can get streaming channels on your TV.

Some links on this post are affiliate links. As an Amazon Associate I earn from qualifying purchases at no additional cost to you.

How to Watch Streaming Channels on a TV

It’s actually pretty easy to watch streaming channels on your TV now. And none of them require contracts, monthly fees, waiting for installers, or rental equipment.

There’s 4 main ways you can watch streaming apps on a TV.

Most newer TV’s are smart TV’s. The home screen on those tv’s already has a built in guide that let’s you add and remove whichever streaming apps you’d like.

The smart tv stores your log in information for each app. So, you can just go straight to your favorite apps and start watching as soon as you turn the TV on.

Most newer TV’s also let you Smartcast from your smart phone, computer, or iPad onto your newer TV. That means when you are watching a streaming app, like Netflix or YouTube, on a device you can select the Smartcast icon to show what’s on that app on your TV.

This is great for watching your streaming apps on vacation too.

If the hotel or house you’re renting has a TV that can receive Smartcasting, you can watch all of your streaming channels by using your phone, or other device, as the interface and controller.

Streaming Sticks can be plugged into an HDMI port on a TV. Streaming sticks add an interface to your TV that let’s you access your streaming channels.

Just be sure to plug the streaming stick into an outlet. Or you’ll have to replace the batteries every week if you don’t.

You can also take your streaming stick on vacation with you. Plug it into your hotel tv or rental tv to continue watching all of your favorite shows on the road.

The only downside to watching through a gaming console is the controller. It’s not really designed for watching TV, so it can be a bit of a pain to use sometimes.

How to Watch Local Channels or Sports without Cable

After you get rid of cable or satellite TV, the easiest way to still watch your local tv channels and sports is by using an indoor tv antenna that plugs into an HDMI port on your TV.

Some of those indoor tv antennas also have a DVR that will record your local shows for you.

That DVR makes it easy to keep up with local sports, news, and traditional network shows without the huge monthly expense that your cable company charged for their DVR.

Pros and Cons of Cable TV

Good Reasons To Get Rid of Cable

Its So So Expensive!

Cable TV has long been a source of annoyance for anyone that has had it. The monthly costs are incredibly high.

You generally have to agree to a contract length with a cancellation fee to get the best deal. And, about once a year you have to threaten to leave to get a better deal.

No More Installers and Repairmen

Another negative for cable is having to schedule and wait around for installers or repairmen. No one really wants strangers in their house, right? At least I don’t. You never need an installer for streaming tv.

Cable and Satellite Equipment is an Eye Sore

And, you don’t need cable jacks behind every TV anymore either. Yay! No more extra holes in the walls. And, you don’t have to plan a rooms layout around where the cable jack is either.

If you have satellite TV, then no more ugly satellites on your roof. I have 2 satellites from a previous homeowner on my roof that I’d love to get rid of. I guess I’ll finally do that the next time we need a new roof. Ugh.

Another great reason to get rid of cable is to get rid of all of those extra taxes and equipment rental fees that come with cable tv. There is no equipment to rent with streaming channels. That’s a huge win!

I can really only think of 2 things I miss about cable. The first is the DVR. I could record shows and keep them forever, if I wanted too. That really did make watching TV so convenient.

The second downside is just that I was used to the cable channels, guide and interface. It takes a little time to get used to the new interface with streaming apps.

And, you have to remember which streaming app your show is on. Luckily, all of those streaming apps let you save your favorites and they remind you about shows you haven’t finished watching yet.

Does Getting Rid of Cable Save Money?

Can you save money if you get rid of cable? Absolutely!

Getting rid of cable is saving me a lot of money. Almost $124 per month, guys. That’s nearly an extra $1500 a year in my pocket. I could really save another $30 a month if I wanted to only use free streaming channels.

For years I have only paid for HBO a month or two out of every year. I just turn it back on when I’m ready to binge shows like Big Little Lies or Game of Thrones.

So, the key to keeping streaming costs low is to always turn off what you don’t watch. Don’t pay for extra services you haven’t used in a couple weeks.

Should I Get Rid of Cable

Watch this video to see more reasons why I think it’s time to get rid of cable.

Should I Get Rid of Cable? How I cut the cord and saved money on streaming channels in 2021

There are so, so many free streaming channels available. You could honestly have an endless supply of tv and movies to watch using just free streaming apps. They make money by showing ads, just like local and cable tv.

Free streaming apps offer a limited amount of the shows that are usually shown on those channels. So, you might have 4 episodes of a bunch of their shows on the free version of those apps.

Most of the free apps also have a monthly paid version that unlocks a lot more episodes and shows. Generally the fees are pretty low. Mostly around $5 per month for a single channel, like PBS Kids or NickHits.

With so many free options plus a plug in local TV indoor antenna you could completely get rid of cable and still have tons of tv shows and movies available.

Now, let’s talk about some of the most popular budget friendly streaming channels.

Netflix, of course, has been a long time favorite. I’ve had it for years, even when I had cable. They have so much great content, for everyone in the family, you could really just have Netflix and never get bored.

Disney+ just came out in the last two years but it has already became one of the most popular streaming services. Watch Disney’s decades of TV and movies with Pixar, Marvel, Star Wars, and National Geographic in one place for around $8 per month.

You can also add ESPN+ and Hulu onto the Disney+ as a bundle. Get all 3 of those channels for just $14 per month. That bundle is great for sports lovers.

Discovery+ is another exciting new streaming channel that bundles together most of my favorite cable tv channels. And, they’ve added in the new Magnolia Network that has been getting a lot of buzz for the last 2 years.

The Key to Saving Money with Streaming Apps

Paramount, NBC Sports, HBOMax and so many more channels than I can mention offer great content at a low cost.

BUT, I can’t say enough that the key to saving money with streaming apps is to turn them off and on as you need them, to reduce costs.

So, binge Netflix for 2 months. Then switch to HBOMax for another 2 months. Then turn that off and binge your favorites on Hulu. You can even add and remove channels inside on Amazon Prime TV, to keep all of your channels in 1 spot.

You can quickly and easily turn all of these apps off and on online, no more calling customer service, waiting on hold, to spend 20 minutes trying to turn off your service.

Recommended for You: 11 Affordable Ways to Feel & Look Younger in your 40’s!

This is really just my personal opinion, but some of these streaming services just seem too much like traditional, expensive cable packages. I wouldn’t use them, just to avoid the big monthly fees.

YouTube TV is different than just watching normal YouTube. YouTube TV offers traditional channels with TV and movies. But, it’s $65 per month! What? That’s as much as a basic cable package. No thanks.

The same goes for the Hulu with Live TV option, at $65 per month. The original monthly Hulu service is so much cheaper and has so much content, you don’t need that expensive add on for live tv.

And even Sling TV isn’t something I’d recommend. I know Sling is popular with people quitting cable. You can get Sling for between $35 and $50 per month, depending on the channels you want.

But, honestly, I had Sling TV for 2 months after we got rid of cable tv and we never used it. With streaming apps and channels there is just so much great tv and movies available, you don’t need the live tv option anymore.

That’s it for what you need to know to get rid of cable, guys. There is honestly so much more to streaming apps that I could never fit into one blog post.

Streaming apps and channels is where to find most of the new and exciting content now. And, so much of it is free or incredibly cheap, now is definitely the time to get rid of cable or satellite tv.

Here’s how to clean your car seats at home…even when they’re disgusting, this works.

Here’s How to Clean a Shower Glass Door without any chemicals or store bought products.

I love this free 19+ page guide for How to Paint Furniture for Beginners.

And, if it is time to Stain your Front Door, check out these steps for how I restain a front door without stripping it or removing it. 🙂

Feeling inspired? Now that you’ve read these tips for how to get rid of cable, you can do it too. Let me know if you have questions. Don’t forget to sign up for the Abbotts At Home email newsletter to get DIY, Remodeling, and Crafty ideas in your inbox.

Stephanie shares new DIY Projects, Woodworking Plans, Home Remodeling, and Craft Projects, every week. Her tutorials focus on remodeling, decorating, or furnishing a home in a stylish and affordable way. Learn more about her here. Be sure to subscribe to our email newsletter to get the latest DIY projects and tutorials. 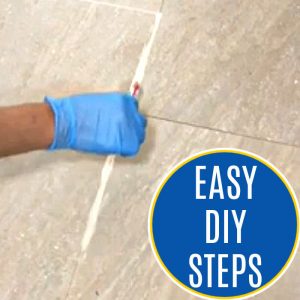 Whiten and Seal Grout At the Same Time! 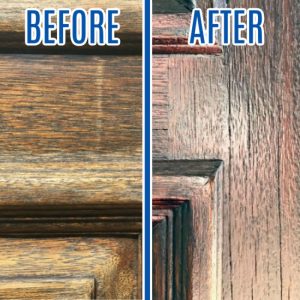 Without Stripping, Sanding, or Removing It!